Jane Estelle Laframboise (aka. Teddie) was born July 26, 1958, the fourth child of eight of the

grandfather imported horses from Ireland for hunting and racing in the early 1900's. Teddie

grew up on a 60 horse breeding and boarding stable in Luskville, Quebec next to the Gatineau

Park. The farm was owned and run by her nurse mother, Mary Anne Laframboise, and her

horse care of all of the Laframboise sisters working in horses. Older sister Lorraine

a boarding and training business in Orangeville. Both sisters are ex-national eventing team

Teddie competed extensively in hunter, jumper,  and eventing all through primary school to university. At 18 Teddie won theOntario Intermediate 3 Day Championships on her 15 hand homebred Soysambu mare, Ladybug. At 22 years old Teddie coached the Quebec Young Rider Team to a one time team gold medal and an individual silver medal  at the North American Young Rider Championships CCI*** in Red Deer, Alberta. Teddie continued to coach part time while pursuing a baccalaureate  in business and education at the University of Ottawa and Toronto respectively.

Laframboise family farm in Luskville competing and coaching students in the hunter/jumper and eventing disciplines.  In 1994

Teddie and Andy moved the business from the Laframboise home farm to  Stevens Creek Farm in Kars. Teddie competed

successfully up to the CCI*** level and 1.40m jumper level, and was listed on the Canadian Team Talent Squad in 1993 before

retiring from competition to dedicate herself to her family and to developing the business. In their first year at Stevens Creek their

son Austin was born and soon after came Moira. During this hectic time of raising a family the business grew from two stalls in the

garage to a fully operational 30 horse boarding and training centre.

Moira works full time in the summers coaching and managing with Teddie while pursuing a liberal arts education at Carleton University.

Stevens Creek Farm is a family run business. All four family members contribute at different levels of participation. Teddie works full time teaching, training and running the everyday business and horse shows. Andy is the weekend handy man when he is not working downtown, Moira is the assistant coach and resident trainer while also attending Carleton University and Austin is famous for his announcing at our annual Horse Trial when he is not pursuing graduate studies in physics at Queens and UBC.

Born April 21, 1998 Moira has ridden horses her entire life and is a 6th generation horsewoman in our family. Moira is

and she was the highest placed Canadian at the North American Young Rider Championships in Lexington, Kentucky

placing 4th overall.  Moira is our resident trainer and has experience backing horses that have gone on to be top competitors. She has

been SCF's assistant coach since 2018. During her first season coaching, her Junior Pre-Entry riders won 1st, 2nd and 3rd at the year-end 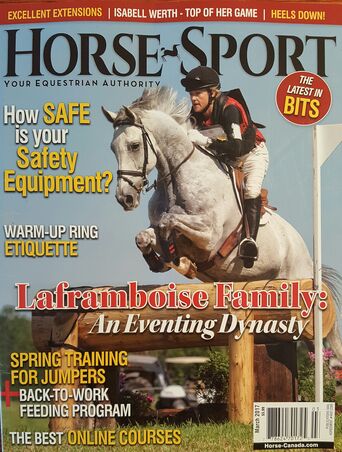